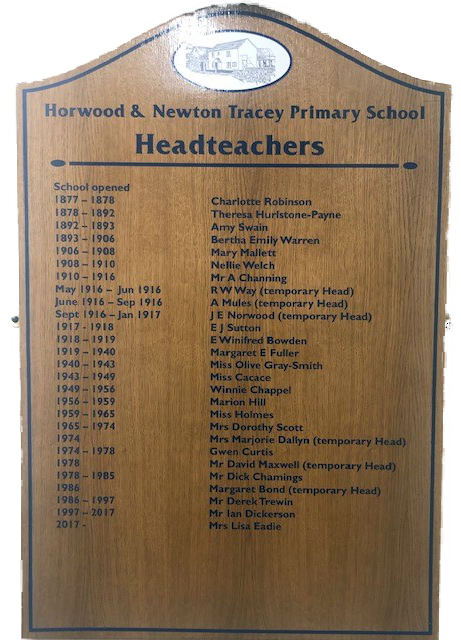 The school opened in 1876, then called "Lovacott Board School" and has had 27 headteachers (or acting Headteachers) to date.

Her nephew, Stewart Fuller was evacuated during the war to Devon and also attended the school.  During this time he lived in the school house with his family and his aunt.  Mr Fuller still lives locally and regularly visits the school - speaking to the children about his experiences and how life has changed locally over the years.

The first Headteacher was appointed on 8th October 1877 and her first entry in the school log book reads,

18th October The children for the most part have behaved themselves very well.

26th October The business of the school has gone on this week very well.  A few new scholars have been added.

November 2nd The first class much improved in their transcription.  Average attendance 22.

16th November The behaviour of the scholars this week especially for the last 3 days has been exceedingly bad. There were a few exceptions, however.

23rd November  I am glad to say that the conduct of the children has been much better this week, owing to the exercise of a little severity on my part.  Their lessons have not been interrupted.  Average attendance 32."

This website uses cookies to improve your experience while you navigate through the website. Out of these cookies, the cookies that are categorized as necessary are stored on your browser as they are essential for the working of basic functionalities of the website. We also use third-party cookies that help us analyze and understand how you use this website. These cookies will be stored in your browser only with your consent. You also have the option to opt-out of these cookies. But opting out of some of these cookies may have an effect on your browsing experience.
Necessary Always Enabled
Necessary cookies are absolutely essential for the website to function properly. This category only includes cookies that ensures basic functionalities and security features of the website. These cookies do not store any personal information.
Non-necessary
Any cookies that may not be particularly necessary for the website to function and is used specifically to collect user personal data via analytics, ads, other embedded contents are termed as non-necessary cookies. It is mandatory to procure user consent prior to running these cookies on your website.
SAVE & ACCEPT